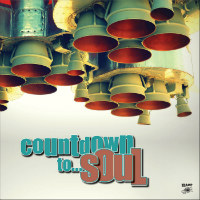 Some might feel that launching a new compilation series when you’ve already got multiple vintage funk, soul, rnb and jazz ones on the go is a bridge too far. And it’s certainly true that Tramp are currently spinning myriad plates – Feeling Nice for example, not to mention Movements, Praise Poems, Santa’s Funk & Soul Christmas Party, the Story Of… artist-focussed series and another focussing on particular labels such as Goldband/ ANLA, GME/ Musette and Virtue Recording Studios. Happily Tramp appear able to take things to any bridge, however far, possessing apparently inexhaustible plate-spinning (in all sense of the words) skills and an unerring ability to strike obscure black gold in dusty crates. And so it is that the countdown has already begun to the label’s new series Countdown To Soul which will well-and-truly hit the vein of the discerning soul fiend.

The album itself represents a spectrum of music that runs from funky soul to soul jazz and while much of it could easily have appeared on either a new Movements or Feeling Nice volume, it also casts its net wider at times with occasional mind-broadening (and blowing) selections. It’s the Jackie Johnson Back Beaters however, who actually get to open the LP with the chocolate-smooth and socially aware soul-vibes of How Tough It Was, followed by the gospel-rnb of a Chances cut, The Fugitives’ Archie Brooks with a funkier soul brother bump, a big brass-led Hank Hodges groover of the kind beloved on the early mod scene and Patti Drew-ish sister soul number Lovin’ by Holly Carroll. After this it’s the turn of four mod-friendly soul jazz dancefloor burners from the likes of Ulysses Crockett, Don Patterson, Spider Martin and John Lewis sound – though the hoe-down violins that vie with pianos on the last of these prefigure the country funk at the end of the LP.

Just over halfway through the LP is a 45 cut that needs no introduction having already appeared on Cut Chemist and Shadow’s Brainfreeze Breaks nearly twenty years ago though even they didn’t manage to license a 45 repress like – wait for it – Tramp recently did – and if you didn’t already cop yourself 7″ doubles of Reuben Bell’s DJ-anthem Superjock, what have you been doing? Hot on Bell’s heels is the uptempo funky sureshot of Mel Production Band’s Do The Airplane and Spangle’s equally dope early Kool & The Gang-ish Do Dat Stuff. After which the script gets flipped completely with Rita Macneil’s Tell It Like It Is – an utterly batshit cut with an almost Dead Kennedy’s-like stomp and MacNeil’s crazy folk voice – less soul-sister than holy sister but with secular lyrics demanding free abortion and equal rights for women – to which, however improbably, you will find yourself bellowing along. How the hell do you follow that though? The answer is with a trio of scorching country funk bangers that Light In The Attic wished they’d got their mitts on for their Country Funk comps. (International Boogie Band’s fiery Silver Dollar Lady, Lawrence Dixon’s brooding The Steel Man, and Sherri Hays’ super-funky I Helped You Go – regarding the first and last of which – drum break alert!) and closing with John Brown’s wistful psych-ballad that constitutes the second (after the MacNeil track) of the comp.’s horizon-broadening curveballs. Countdown To Soul then – the kind of thing that has you counting down to Vol. 2 before Vol. 1 has even dropped.
(Out 22 September on Tramp Records)

Posted on 17th September 2017 no comments