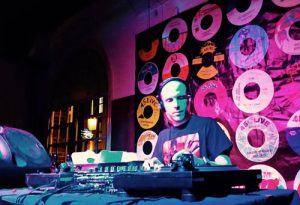 Monkeyboxing.com is the long-running, internationally-known, number one blog for FUNK, SOUL, HIP-HOP, REGGAE and BREAKS. MB brings you the latest news, (p)reviews, features and release details in a manner that veers erratically from the irreverent to something more grown-up sounding like – say – the output of a traditional music journalist – sometimes within a single post. This varying approach seems to have led some to believe that monkeyboxing is the work of a tireless team of beat fiends whereas in truth MB is and always has been, the work of just one man.

Bristol, UK-based editor and creative director Stone Monkey a.k.a DJ Mako of Mako & The Hawk and Mako & Mr Bristow (Breakbeat Paradise, Funk Blasters, Freestyle, Resense, Tru:Funk, Tour Of Booty) first began monkeyboxing on Myspace and Blogger in 2006. Yep, that long ago. MB progressed to its first .com incarnation in 2008, was re-designed in 2010 and finally got a mobile-friendly makeover in 2016. In that time, MB has received well over one and a half million visits, been referenced as a source on Wikipedia, survived two major hacks (one of which re-directed MB to a Viagra store for a time) and a catastrophic third party server crash that permanently lost two and a half months’ of posts and incurred a heavy Google search penalty for dead links.

But the monkey is still here. Plans are afoot. And one thing has never changed: if you’re someone who thinks fat drum breaks and basslines are the apex of musical culture, then you’ve come to the right place, because the monkey is all about the funky bumpin’ beats.