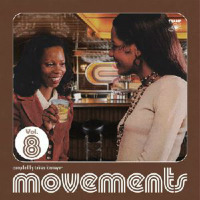 Are Tramp trying to outdo Soul Jazz Records and/or BGP? It’s like a re-run of the Anglo-German naval arms race before WW1 only with rare vinyl instead of dreadnought battleships or something. And the way they keep the number of regular compilation series they manage to run in between all those record buying trips (Feeling Nice, Praise Poems, Santa’s Funk & Soul Christmas Party, The Story Of… and Movements) – even before all the re-pressed 45s and one-off LPs is an impressive feat of platter spinning – both metaphorically and of the black wax kind.

Which brings us to Movements 8 – the latest in the long-running Movements series. But what have those crazy plate-spinning, crate-digging Bavarians conjured up this time. Funk? Check. Soul? Check. Stuff that sounds like Hey Big Spender? Check. Wait – what?! Nope – really. Check out opener Papa Albert French’s Bald-Headed Beulah. Then there’s the louche dixie-flavoured jazz of Bony Bony in fact the first five numbers are all pretty jazzy in flavour. But don’t worry, things get funky with the crusty old swamp flavour of Joe Wilson’s Sam Sam The Money Man and the fat break (virtually identical to the one on Eddie Bo and Inez Cheatham’s Lover And A Friend, fact fans!) of Shelley Fisher’s I’ll Leave You Girl. Doc Rand’s I Need A Woman is stank uptempo funky soul, The Noteables’ cut brings a Georgie Fame-ish vibe and things stay funky pretty much to the end taking in an instrumental take on Ode To Billy Joe, and winding up in the seventies with the likes of Nathan Bartell’s Top Going Down, Bottom Going Up. You knew with that much funk it was going to get the full monkey approval, right?
(Out 11 March on Tramp Records)