TRAMP RECORDS: The Soulful Side Of GME & Musette Records (2017) 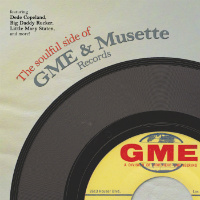 Honestly, you write about not having had a Tramp retrospective focussing on some obscure soul-funk artist in a while and then they go and do their other speciality of dropping a comp. focussing on some obscure soul-funk label. It’s actually been three years since the previous such volume on which they checked out The Funky Side Of Goldband & ANLA – the Louisiana label known for Cajun releases but which nevertheless, for a time, put out obscure but dope rnb, soul and funk records. This time however, the spotlight is on San Diego labels GME and Musette – the latter of which was only around for a blink-and-you-miss-it three years between ’65 and ’68 during which period it released only 45s. Still, given that it was around in those particular years, it must have put out some stank soul, funk and rnb, right?

Absolutely right. Not bad for a label originally established so that a number of black doctors could write-off taxes, which they did through stumping up the money to sponsor releases and getting a writing credit despite having bugger all to do with any of the tracks. The other label, GME was started by Musette artist Ervin Rucker a.k.a Big Daddy Rucker – the father of Lani Groves – one of the first artists to be put out on Musette. Included on the comp. are parts 1 and 2 of Arlene Williams’ lively rnb/ boogaloo titty-shaker Duck All Over Town. There are also no fewer than six Big Daddy Rucker numbers included soul banger Just Do Your Thing (a cut so big, he re-recorded it as She’s Alright – also featured), clattery funky bump Jealous Man (a cut so hot, he did an instro version called The Big Daddy Shake) and a brace of blues cuts. The balance of tracks is made up by three wafty bits of soul jazz from his daughter (her name variously spelt as Lani Groves and Lenni Groves); two solid soul bumps from Little Mary Staten that have exactly the vibe Dusty Springfield wanted to bring back to the UK from the States; funky, soulful duet Sunset Strip by Garnett Scott and Lani Groves (making another appearance) plus two bumps from Dede Copeland. One of these is another wafty soul jazz slowie along the lines of Lenni Groves’ earlier I Feel Pretty – the other is the absolute album highlight – the short but super-sweet, dancefloor, sister-soul banger You Gotta Give Up Some Money. Don’t sleep!
(Out now on Tramp Records)