VARIOUS: The Funky Side of Goldband/ ANLA Records (2014) 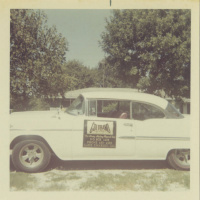 If anyone’s doing more than Tramp Records to preserve the legacy of rare and overlooked funk and soul at the moment, the monkey doesn’t know about them and they should probably get in touch. But since Tramp are still very much digging, the good stuff is still coming and despite the year being well on the way to a close, the label has still managed to hand in a twenty-three track compilation of the funkiest 60s and 70s releases from what is apparently the longest running independent US record label, Goldband.

The operation was pretty much the pet project of one Eddie Shuler from its inception until the man’s death just under a decade ago. Not only did the Louisiana-based label release Cajun music, country (and western!) and ‘swamp-pop’ (don’t ask) but it also, on subsidiary label ANLA (which the canny Shuler set up to increase airplay), put out a fair amount of rnb, soul and funk.

Strictly speaking, the first third of The Funky Side Of Goldband/ ANLA is uptempo rnb and boogaloo titty shakers. Nothing wrong with that – it includes such stormers as The Showboats’ opening rocket, Sidewinder, and Claude Shermack’s soul burner Keep On Keeping On. Rhythmically though, the funk proper doesn’t begin until the organ-led bump of the eighth cut – Lee Bernard’s Turn Around And Go. Highlights include the uptempo bluesy guitars’ n keys combo of Count Rockin’ Sidney’s Put It On, Lee Barnard’s sax n keys combo Getting Out Of Town, the loose rhythmic juice of Back Door Man by Count Rockin’ Sidney (again) and a superb closer by (yet again) Count Rockin’ Sidney (he did almost a dozen releases for the label) – the peace crazies vibe of Bury The Hatchet. I think it’s time to show some love for the forgotten sound of Goldband, funk fiends…
(Out now on Tramp Records)

Posted on 9th November 2014 no comments