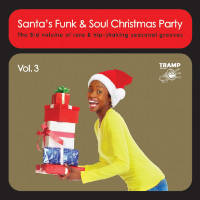 Rock the decks with breaks and holly! Santa’s got a brand new sack! Again! Yes, in what appears to be a ‘one year on: two years off’ approach to their seasonal compilation series, Tramp Records turn in Vol. 3 of Santa’s Funk & Soul Christmas Party and not a moment too soon. No not in that way – christ – who wants to celebrate Christmas in the middle of November apart from corporate cocks whose charity of choice is themselves? No, what I mean is, if this comes out now and it’s this good (and it is), people won’t want to play bastard Slade or Wizzard – or worse – again. Oh alright – whose kidding who? This probably isn’t going to be played in every supermarket, shopping mall, petrol station. But it should be.

Why? Because not only is there no drop in quality for Vol. 3 – it’s arguably the best one so far. That’s right, songs with Christmas-themed lyrics that are actually enjoyable. And funky. And because they’re funky – they contain breaks, sample fiends! Rocki Lane & The Gross Group’s Santa Soul is a good example – something you could play at any time of year (because it’s an instro) – though the best break is arguably from opener Joe Shinall’s Sock It To ‘Em Santa. Want festive soul variety though? Try early 60s rnb feel of Velle Scott’s Merry Christmas and the mod-liness of The Individuals’ Holiday For Drums while at the other extreme Timi Terrific & The Redheads’ Black (Soul) Christmas is plumb full of late 70s/early 80s synth sounds. Want a silly title? You’ve got the right genre – and it’s the Bionic I’s Disco Claus which wins hands down. Hands in the air seasonal b-boy breaks? Rocki Lane again. Loose groove? Cleveland Robinson’s Xmas Time Is Here Again. Choice lyric? “If somebody sees Santa at Christmas/ When he steals down the chimney with care/ Wouldn’t it be so revealing/ If Santa had black kinky hair.” Well, quite. And preferably a lowrider sleigh and a pimped Rudolf waiting on the roof.
(Out 19 November on Tramp Records)

Posted on 19th November 2015 no comments