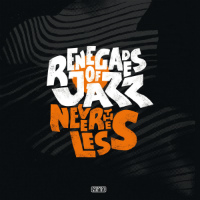 Since 2011, he’s invented the genre of ‘northern jazz’ and put out two albums’ worth of it (plus a remix LP of one of them), created an epically atmospheric Lucifer-themed concept album (plus a remix of the same), dropped an afro-beat inspired long player (and, again, a remix of the same) and now, creative powers as fertile as ever, David Hanke a.k.a Renegades Of Jazz, releases his eighth full length effort Nevertheless. Which, it turns out, is something of a melting pot of his previous influences taking in his early ‘northern jazz’ material while evincing an afro-influence (sometimes on the same track) and hitting up both singers and rappers à la Paradise Lost.

The first third of the album is purely instrumental with opener Lemon Squeezers tapping straight into the uptempo drums n jazz licks vibe of Hip To The Jive as do the next two Big Fish and Another Day (Going In Too Deep).   The arrangements are maybe busier than on that first LP though and – especially on the latter where the horns get a bit Mulatu Astatke somewhere around the end of the first third – afro stylings begin to creep in as they do on the title track follows it.  Then the guest slots appear.  Every track bar one on the remaining two thirds of the LP features either a rapper or a singer – and it’s arguably among these the best beats can be found on this outing. Hot Wired ups the funk and slows the pace enough for London-based emcee Donnie Numeric to climb aboard and provide punters with a message of self-affirmation before the pace drops a further notch and the mic baton is passed to The Impellers’ Clair Fallows for the head-nod soul of Light Me Up. French rapper Urda is up next as the bpms climb once more for arguably the dopest beat on the LP – the northern jazzy En Route.  Among the remaining cuts, Jon Kenzei fills the male soul vocal slot meanwhile whilst Kemi Ade is on hand to lend additional late nineties downtempo stylings to the trip-hoppy outro This Journey.  In short, Nevertheless has a breadth of styles to match Paradise Lost and arguably the broadest appeal of ROJ’s many LPs so far.
(Out now on Agogo Records)