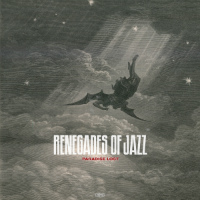 Renegades Of Jazz made his full-length debut back in 2011 with Hip To The Jive on Smoove’s Wass Records and causing a frisson of breakbeat excitement with his super fresh ‘northern jazz’ sound. The pre- and post-LP single drops and subsequent releases gained ROJ multiple plaudits all round. Four years down the line, it’s time for LP number two: Paradise Lost, conceptually inspired by Milton’s epic poem portraying the Devil as a tragic hero, for which ROJ (David Hanke to his mum) has assembled a veritable host of rebel vocalists. Is he having a laugh? A concept album based on the poetry of John Milton?! Colossal musical hubris – or does Satan – I mean – Hanke, still have the all the best tunes? Let’s find out!

1. HAUNTING NORTH
Moody intro, all creepy effects and sinister oboe, then the beat and a monster woodwind melody kick in. Sounds a bit like incidental music on The Ninth Gate. And the monkey loves The Ninth Gate. Winner!

5. FIRE feat. ASPECTS
Bristol’s Aspects have long been in the pay of Lucifer. Here they get suitably fowl, I mean gargoyle, on the lead single – an epic uptempo clattery drums ‘n pulsing bass groove.

8. CANNIBAL ROYAL feat. GREG BLACKMAN
…this one’s the voodoo one…

9. TAMERLANE feat. GREG BLACKMAN
…and this one walks on gilded splinters.

10. DEATH GRIP feat. CHIMA ANYA
A beat that almost sounds like it’s been built from satanic film noir samples, if such a genre existed. Oh wait – it does – Angel Heart. And the monkey loves Angel Heart! Class lyrics of fear from the ‘doctor,’ Chima Anya too.

12. BAN-SHEE
…and if this isn’t a nod to Angelo Badalamenti’s score for the demon-haunted Twin Peaks, I don’t know what is.

COMMENTS: There might be little money in making music any more but an album like Paradise Lost proves that as an artist it’s surely better to make beats in hell than serve the likes of Simon Cowell in heaven. A highly cohesive effort, featuring flawless production, an array of talented vocalists, and triumphant execution of a concept with nary a weak moment on it. A true listening experience that also has dancefloor potential and sets a devilishly high benchmark for other breakbeat albums to match at such an early point in the year…

Posted on 7th January 2015 no comments