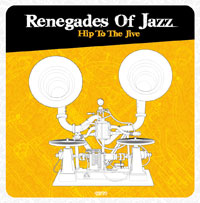 Here he is, look, the only man to have done anything original (and good) with jazz and breakbeats since A Tribe Called Quest pretty much. That’ll be Renegades Of Jazz then – a.k.a. David Hanke – a jazz renegade if ever there was one. Put aside your notions of shitty old acid jazz and pretentious chin-stroky tossers – this isn’t anything like that kind of pretentious noodle wank and you can also put aside your notions of the more tedious (and equally pretentious) end of jazzy hip-hop. Hanke’s recipe is simple – his breaks are mainly uptempo and b-boy friendly but instead of the more common funk/ electro/ rock samples he plumps for big band jazz. The heavy b-boy breaks render this dancefloor-ready and give the jazz a massive pair of bollocks that very few other experiments with jazz and breakbeats ever achieve while the big band jazz samples (as opposed to jazz funk samples) lend an air of the unusual and the classy. It’s kind of like what you’d expect Duke Ellington to come up with – were he to be confined in the studio with Cut Chemist. And in fact there are times when nothing springs to mind so much as Chemist’s instrumental closer Swing Set on Jurassic 5’s underrated second LP Quality Control. Anyone who’s caught singles Cascade, Karabine or Get A Wiggle On (all of which feature on the LP) which consistently demonstrated the kind of dope sophistication Hanke effortlessly drops will be unsurprised to find that the rest of the LP is equally hot shit. I fully expect to find b-boy conventions invaded by languid, plus-fours wearing, Martini-quaffing types as the breaks world becomes hip to the jive next month.
(Out 9 September 2011 on Wass Records)

Hip To The Jive by Renegades Of Jazz

(PRESS RELEASE)
Wass Records are very proud to present Renegades Of Jazz with their debut-album “Hip To the Jive.” This album is brimming with dance floor shakers and raw break beat with a touch of Big Band Jazz.

David Hanke is the German brainchild of Renegades Of Jazz and has been making big waves since his first 12”single Karabine was released on Wass Records in 2010 creating a big impact amongst avid vinyl collectors and music fans alike.

Played by the likes of Craig Charles (BB6 Music) and Pete Isaac (Jelly Jazz) the Renegades Of Jazz sound has found a lot love and support worldwide. Through the huge success, Renegades Of Jazz is already taking shape to become a nine-piece live band set to take to the stage in 2012.

Hip To the Jive is released on limited vinyl 500 copies only on Wass Records 9th September 2011.