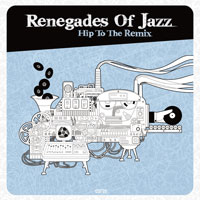 On which Renegades Of Jazz continues his mission to reclaim use of the word ‘hip’ to mean ‘rather well-informed about and appreciative of’ from its association with a certain eighties yuppie pop anthem. But that’s enough about Huey Lewis – let’s skip to the news which is that Renegades Of Jazz’s superb Hip To The Jive album has been remixed as Hip To The Remix. Yep, all twelve tracks – except Cascade which has been substituted for non-LP track Seaside Suicide.

The remix crew number the following (deep breath): Hugo Kant, Deli-Kutt, The Uptown Felaz, Daytoner, Dusty, Andy Taylor, Frohlocker, Tim McVicar, Suonho, Gentle, Herma Puma and Printempo who between them transform ROJ’s ‘northern jazz’ (b-boy breaks with a jazzy twist) sound into everything from hip-hop (Herma Puma) to Latin breaks (Andy Taylor), jazz n bass (Daytoner), jazzy ghetto funk (Tim McVicar), downtempo chillout (Printempo) and a multitude of jazzy breaks variations. Best rerubs include the aforementioned ones from Herma Puma (featuring rapper Redkin Tha Ancient), Tim McVicar’s version of my favourite off the original (Jitterbug) and Printempo plus Hugo Kant’s rolling hip-hop instrumental, Andy Taylor’s latin blast and Frohlocker’s take on jazz breaks. Actually that’s half of them isn’t it? And the others aren’t bad either. It’s all so damn hip – hip to the hop, hippy hippy shakes…hip replacement. Put it this way – if you were ‘rather well-informed about and appreciative of’ the original you’ll feel more or less the same about this latest Wass Records release and want to avail yourself of a copy – or ‘have a Wass’ as I like to think of it.
(Out now on Wass Records)