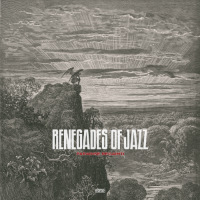 Renegades Of Jazz made a very early bid for album of the year with his Satanic-themed, Milton-inspired northern jazz breaks epic Paradise Lost all the way back in January and there’s been little to rival its magnificence thus far. Now a decent amount of time has elapsed however, Agogo are all primed to summon its counterpart to earth – a counterpart travelling by the name of Paradise Regain’d. But what’s this? The tracks sound different! Some are entirely missing and there is more than one version of others! ‘Tis the devils’ work!

Well not quite – it doesn’t take a breaks-finder general to divine that what we have here is the remix album. Nor does it take a breaks-finder general to appreciate that this remix album is very nearly as mighty as the original. All three previously-released quality remixes of the Aspects-featuring Fire (courtesy of Skeewiff, Smoove and Max ‘Cadien’ Sedgley) make it onto the LP , there are no fewer than four versions of the Greg Blackman-featuring Tamerlane, two takes on the Chima Anya-featuring Death Grip and two rerubs of the Jane Kennaway-featuring Neverday.

What you want to know though, are which are the best cuts. Well, of particular note is Jim Dunloop’s mix of Death Grip and Skeewiff and Smoove’s remixes of Fire but as with the original, all the Greg Blackman-featuring numbers are hot – the ‘Spike The Punch’ version of Cannibal Royal is downright nasty b-boy breaks for example, and its only rivals are the soulful ‘Got The Blues’ version of the Greg Blackman-featuring Imperial Breed and the ‘Ride Of The Renegades’ remix of the Dylan Kennaway-featuring Hellesens which again ventures into the realm of b-boy breaks. Indeed it’s hard to pick winner from the latter three. All of which goes to show that’s it’s practically impossible not to do a good Renegades Of Jazz remix and that of all the people to remix Renegades Of Jazz – Mr David ‘Renegades Of Jazz’ Hanke is the best person to get to do it.
(Out 28 August on Agogo Records)

One Response to RENEGADES OF JAZZ: Paradise Regain’d (2015)