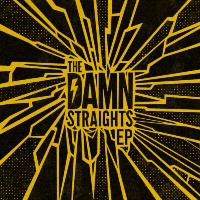 Never a man to have merely a single iron in his fire, Lack Of Afro’s Adam Gibbons follows the release of sixties soundtrack/ cinematic soul-influenced Here We Go EP with an entirely different project in collaboration with rapper Herbal T who constitutes the other fifty per cent of The Damn Straights. Nominally hip-hop, the EP features nearly as much rock guitar as a Beastie Boys punk release and, as it transpires, was also recorded in the Beasties’ territory of Brooklyn – albeit in 2017. The EP’s first single and opener The World’s On Fire (Let It Burn) comes on like a scuzz-rock My Name Is… while second track and second single Blow It Up draws more obviously on 80s hardcore, sounding like a slicker version of Beastie punk. The remaining two cuts are Alarm Clock and Never Get Enough – the former being the most conventionally hip-hop track of the release (though it maintains heavy fuzz guitar on the hook) while the latter straddles the hip-hop-hardcore divide. Even if the music hybridises the punk and hip-hop templates in a variety of ways though, does the borderline nihilistic lyrical intensity (and delivery) remain unwavering throughout? Damn straight it does!
(Out now on Bastion Music Group)

Posted on 27th February 2021 no comments