THE DAMN STRAIGHTS: The World’s On Fire (Let It Burn) 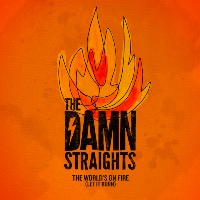 Producer and multi-instrumentalist Lack of Afro hooks up once more with emcee Herbal T to become The Damn Straights and they announce their partnership with the single The World’s On Fire (Let It Burn). Imagine a scuzzy funk-rock-hip-hop take on Eminem’s My Name Is… taking a lyrical WTF! look at the state of things and you’re ballpark. Turns out the track was actually recorded with a bunch of others about four years ago in NYC just as the entire world appeared to detour in an alternative political universe. What with real life getting in the way (not to mention Herbal T’s ire only becoming even more relevant) it’s taken this long to find a breather just to fix a release. If you think all that ire is past its sell-by date just because Trump’s on his way out though, don’t forget that Donald has a couple of months before Inauguration Day to spectacularly throw his toys out of the pram in his customary graceless manner.
(Out now on The Bastion Music Group)

The Damn Straights · The World’s On Fire (Let It Burn)


Posted on 8th November 2020 no comments