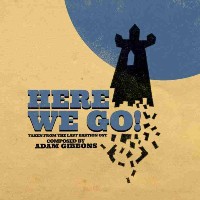 Lack Of Afro’s Adam Gibbons travels under his own name on his next release – the Here We Go EP – employing the ‘soundtrack for a film that hasn’t been made’ conceptual trope. The cover art combined with foreknowledge of LOA’s oeuvre to date suggests some sort of funky spaghetti western business and there’s arguably something to this, although the loud guitars which feature on most of the tracks owe at least a much to Les Baxter’s late sixties work on stuff like Hells Belles as anything else. The release isn’t slavishly retro though, the production nodding to the sixties and seventies rather than attempting to completely recreate the vibe. As the titles might suggest, Here We Go and On The Run! are the chase themes while the horns on Journey To Bastion make it the most Western-ish of the bunch though it’s still pretty full-on – as are I Think He’s Dead (understandably!) and Jordan’s Return. Getting Intimate on the other hand provides plenty of sensual thrills with its evocation of seventies Euro-porn OSTs. The EP’s tracks are all drawn from a full-length LP – the forthcoming The Last Bastion.
(Out now on Bastion Music Group)

Posted on 5th February 2021 no comments