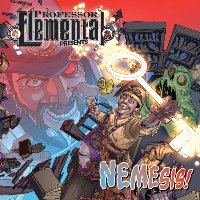 An overarching comedy steampunk narrative is the gift that keeps on giving, it seems, with the arrival of Nemesis, another long-playing instalment in the adventures of chap-hop MC Professor Elemental. But could this be the final instalment? If you’re not up to speed, the Prof. is the veteran of multiple adventures many of which have involved time-travel and fiendish anthropomorphic animal villains along with multiple cups of tea plus some sort of specialist breeches (usually his fighting trousers or his time-travel trousers) – oh – and crucially, his orang-utan butler, Geoffrey.

This one kicks off with the Prof. at a gig doing his fourth encore over a beat previously used by Tom Caruana on his epic Black Gold Wu-Hendrix mash-up LP and thus hits you with a double whammy immediately. Firstly, Tom Caruana is exclusively back in the production seat after Elemental’s recent adventures with Mr Frisbee, and others on The Good Dad Club, Let’s Get Messy and …Amazing Friends Pt 2. Secondly – er – why is he starting with an encore?

It soon transpires that the Prof. has been plugged into some sort of VR machine in an alternate dimension since the end of the School Of Whimsy album and has been living a lie until he is suddenly awakened from a disturbing skit featuring a predatory royal (no, not that one). Happily his faithful simian butler is on hand to help. Which is just as well given the presence of quantum policeman Constable Problem (a.k.a Adam Felman) who is very slightly miffed because Elemental has somehow erased his wife’s very existence. Obviously, dealing with this can wait until after whimsical slice of chap-hop I Love Libraries plays out though at which point it becomes clear that Great Uncle Crowley Elemental’s ‘wishing key’ is the solution to the Prof’s predicament. Cue madcap adventures through a vast ‘mansion’ (which is how the alternate reality is manifesting), a swing-hop celebration of the humble British bath-time and a moody chap-hop attic crawl through ancient but sentient toys until arriving via some sort of wormhole in the genuine Elemental mansion. Problem solved?  Of course it isn’t!  Turns out the world has been functioning just fine without Elemental and having assembled a fiendish army from Elemental’s personal rogues gallery, Constable Problem intends to keep it that way.  This can only be resolved by battle rap Have At Thee, with Elemental emerging triumphant thanks to his Great Uncle’s magical key. But of course victory has a price and that price is that Geoffrey must take Problem’s place as a constable of time so that Problem can retire with his resurrected wife.  Or something.  Turns out the Prof’s dismay at this (“It’s time to hang my hat up, join in with the establishment/ My orang-utan is gone, I’ll get a job in middle management” ) is short-lived and the remainder of All For You is a jaunty paean to his fans,“but there is nothing sadder, than giving up on dreams/ That vision’s wack; it sucks; let’s smash it all to smithereens.”

His last bow then? Well the inter-dimensional alert does go off on the Epilogue and Elemental’s final words are, “Come on chaps – to adventure!”  so it seems pretty safe to assume that rumours of the demise of the career of our bumbling but somehow lovable ‘one-man League of Extraordinary Gentlemen’ might have been greatly exaggerated.

Posted on 10th November 2021 no comments