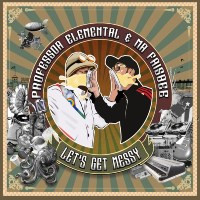 Get messy? Don’t mind if I do! Yes, lovable neo-Victorian, future-vintage, time-travelling, master of ceremonies, Professor Elemental has donned his fighting trousers once more for a new phonographic  recording dubbed, purely coincidentally, Let’s Get Messy. Riding production shotgun in the Prof’s line-streamed steam gurney for this particular musical journey however is, unusually, Mr Frisbee (previously responsible for More Of What You Asked For on Professor Elemental & His Amazing Friends) rather than Tom Caruana who is doubtless either sinking a few at the Inn At The End Of Time or up to his elbows in steam samples.

Weighing in at eleven tracks and just over half an hour long, this is a relatively brisk offering from the Prof. – especially when you consider that the LP is bookended by two instrumental cuts.  But that’s ok because the instros are here to showcase the hip-hop chops of Mr Frisbee and reassure you that, like the absent TC, he’s well-versed in his game. With Prof. regulars in a calmer state of mind once opener and first instrumental – er – State Of Mind – is out of the way, it’s enter Elemental time and enter he does, warming things up over a Big John Hamilton-sampling beat in a nod to Big Daddy Kane on Future Vintage, managing to reference both The Italian Job and steampunk grandaddy HG Wells in the opening bars: “Guess who blew the bloody doors off/ Professor Elemental underground like a Morlock!”   Take that Covid-misery – the Prof. and Frisbee are undaunted!  The title track follows, bringing the swing on an even more lunatic upbeat tip and advocating a distinctly un-lockdown-like approach to health and safety.  Good lord!  Surely the Prof. hasn’t let fetishization of a Victorian past persuade him to jingoistic right wing delusions? Not a bit of it – I Put A Curse On You lays into PFI, corporate bonuses, and Olympic-level shits, Jeremy Hunt and Michael Gove. Take that neo-Liberals!  This is followed by a ruminative chap-hop monograph on alter egos, Inside Out, and then a treat for those missing the Prof’s more steam-punk-oriented lyrical tales and his simian butler Geoffrey on the funky To Do List. The final two vocal cuts (the swinging Nice and the brisk boom-bap of The Cat’s Pyjamas) provide a double celebration of niceness and there’s also room for two remixes – a scratch-oriented new beat to replace the original ghetto-funk sound of Professor Elemental and his Amazing Friends: Part 2’s Monster and a funky take on The Giddy Limit‘s All In Together. All of which just leaves closing Frisbee instro Sympathy For The Breville to properly complete the sandwiching (see what I did there?) of this LP’s vocal filling.  Splendid.  A cup of tea to celebrate, I think!
(Out now HERE)