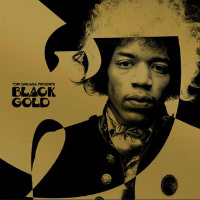 Oh man – now here’s a Christmas present. Those with longish memories might remember that between the Guardian and New York Times-featured Enter The Magical Mystery Chambers mashup LP and The Beatles vs Hip-hop Legends: ‘An Adventure To Pepperland Through Rhyme & Space’ (he’s not one for short titles), Tom Caruana delivered what is not only still the monkey’s favourite mashup LP from Tom Caruana, it is still the monkey’s favourite mashup LP from anyone and, more than that, one of the monkey’s favourite LPs of all time. I speak of course about the now legendary Black Gold a mighty collision of Shaolin’s finest with the greatest guitarist the world has ever seen. Sadly a catastrophic server crash in 2016 managed to zero the record of FB likes of every post published prior to that date so you’ll have to take the monkey’s word that both of the latter two LPs were the most popular posts the monkey has ever published.

At the time there was the hope that Black Gold could get a vinyl release but seemingly insurmountable issues arose which suggested this would never happen. Except that now, it has! Yes, that’s right, Black Gold released on – wait for it – double vinyl with one disc in black and one disc in…gold!. Fifteen of the Wu-Tang vocal cuts off the original version of the LP make it onto black disc and a further two onto the gold disc (along with over twenty instrumentals). Some of the track titles have changed slightly (or completely) and sadly a few tracks didn’t make the cut (no Summin Gotz To Give!), though Fat Lady 69 (formerly When The Fat Lady Sings), Crosstown Happenin (formerly What’s Happenin), Last Call, PLO Style, Wind Cries (formerly Wind Cries Mary), Hey Joe, and KFF2000 are all on there along with fat new joint Breaker Breaker which melds the Breaker Breaker vocals and the Da Mystery Of Chessboxin beat from Spare Nuggets. Limited to 300 copies, this bad boy ships in January. Get your skates on – order HERE.

Posted on 4th December 2018 no comments