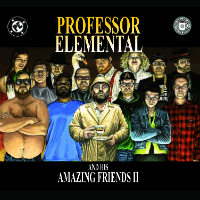 Which brings us to the music. Don’t let the grim expressions on the DC Justice League cover art pastiche fool you though – the Prof is all about the niceness. Indeed, he’s a cheery old cove who’s all about being extra nice as revealed on opener and Flevans-produced funky bounce Testify. Dr Syntax makes an appearance on Housebound Hedonist and Moviestar on The Present but the first of the LPs biggest highlights is the lively Tea Total which finds the Prof and like-minds The Swinghoppers having a brush with the law in a speakeasy-cum-tea shoppe. Lack Of Afro turns up on the reggae-hip-hop beat of Walk in The Sun and then the Prof. is pointing out to ‘Tom’ (almost certainly one Mr Caruana) that a loop is broken and suggesting a gaffer-tape solution at the start of All I Need. Crowd-pleaser, You Remind Me Of A Hustle is up next as Elemental declares his undying love for a lady over a certain disco-track sampling beat and then it’s time for another monkey favourite, the sinuous beat and sinister tale of Snake Oil which draws inspiration from Victorian and Edwardian carnivals. Then we’re on to another Tom Caruana-produced cut, the acid trip that is Just Like An Otter and which ushers in the final, guest-lite but strongest third of the LP – because there’s no flagging for Elemental – it’s all the tea. Brave New World takes social media to task, Ps & Qs delivers the nicest of battle rhymes over a rolling drum break, Devil In The Desert finds the Prof. lost amid endless sands rivalling Tea Total and Snake Oil for the best tale and finally there’s glitch-hop beast Monster. Hurrah! Here’s to to Part 3 which will no doubt sport a Sergeant Pepper cover pastiche or the Prof’s next solo adventure to the centre of the earth, or Mars, or wherever he hasn’t been yet.
(Out now HERE)

Posted on 6th October 2019 no comments