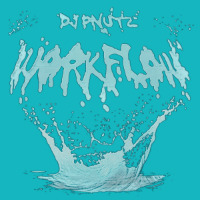 Two time San Diego Music Award nominee DJ Pnutz is back with new LP Work Flow, the first of two planned album releases this year. MB readers will be more familiar with Pnutz from her atmospheric, vocal sample-laden b-boy breaks material from such LPs as Play That Beat Mrs DJ or 16 Psyche whereas the idea on this one was to drop straight neck-snapping hip-hop beats. And that she has certainly achieved though there’s enough stylistic continuity between this and previous material that fans of the latter are highly likely to be fans of this too.

In fact, the main differences between Work Flow and the rest of Pnutz’ ouevre really boil down to two things – firstly, the almost total absence of vocal samples on the album (either spoken word or sung, apart from some orchestral ‘ahhs’ on opener Rising and a jazz loop on closer Alone) and a narrower range of tempos. While previous albums have found Pnutz productions pitching things everywhere from top 80s to well over 120 bpm, material on this is capped at around the high ninety mark. Otherwise, it’s business as usual which is to say booming. And, indeed, bapping – though occasionally the drum patterns get a bit more complex – to wit the complex fills and rolls on opener Rising, again. Mood and genre-wise, the doom-laden first two tracks soon give way to the summery jazz-tinged San Diego Summer and one of the monkey’s favourite cuts on this LP – the cinematic, clarinet-laced Broken Heart and subsequently the snarling rock guitars and funk drum breaks of Dead Rock. This ushers in a string of guitar-led beats until the arrival of the monkey’s other favourite cut, closer Alone with its dusty breaks/ vintage beats vibe. All in all, nice work (and you can get it) plus it gets you wondering why Pnutz hasn’t yet hooked up an emcee to get some flows on those beats.
(Out now HERE)