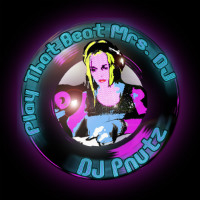 Never let it be said the girls can’t match the beat-making output of the boys as DJ Pnutz drops her third full-length album, Play That Beat Mrs DJ, in two years. And once again the San Diego-based dj/producer weighs in with a substantial opus – this one tipping the scales at fifteen tracks. Like its predecessors, The Good Wife’s Guide To
Beatmaking and 16 Psyche, this in an instrumental affair constructed of both samples and original instrumentation that stylistically nods to the early work of Cut Chemist, RJD2 and DJ Shadow.

Lest that last comment encourage you to think that what we have here is a voyage through the lower tempos of instrumental breakbeat, let’s put that to rest by clarifying that Play That Beat… is arguably even more inspired by breakdance culture than Pnutz’ previous albums and the vibe is mainly uptempo. That’s not to say you won’t find any slowies on here at all though. Around the third of the way through the moody, guitar-led The Song That Can’t Be Named rears its nineties-influenced cyber-thriller soundtrack head and is followed by the appropriately mellow chank of Beach Day. There’s also the stop-starty I’m Not Chef I Just Cook A Lot with its cut-up beats though this feels faster and more in your face than it’s low-to-mid tempo 95 bpm. Elsewhere, it’s all about being over a 100bpm and often way up in the 120s – something apparent almost from the off in the first track proper – the title track – all clattering multi-layered percussion, horn stabs and organ heat. I say ‘first track proper’ since this follows the Booker T and The Sandlot-movie sampling intro both of which evince both the funkiness and the wry sense of humour present in all Pnutz releases. Best cuts include, the soul-jazz-inflected groove of Just To Get A Reptar, pumping old school b-boy homage Beats Street and the five-minutes-plus, psych-funk-influenced beast that is Hummingbird.
(Out now HERE)