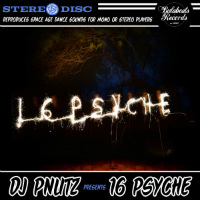 It’s widely known that if you pay peanuts, you get monkeys. What’s less well-known however is that if you pay Pnutz, you get beats and plenty of them – although, frankly, DJ Pnutz is such a beat junky she’d be making them anyway, money or no. And how do we know this? We know this because barely a year after releasing the nineteen track Good Wife’s Guide To Beatmaking (her third full-length LP), Pnutz follows it up with another epic set – the slightly longer and at least as glorious 16 Psyche.

Named after a giant asteroid eh? And does it land with the impact of one? Pretty much yes – but in what kind of terrain, Jim? Well, the answer to that is a dimension opened onto by doors from Deadringer-period RJD2 and Dan The Automator’s late 90s/ early 2000s work. In other words – instrumental hip-hop that lacks the gloom of late 90s DJ Shadow, packs generally mid-tempo beats and has about it an MK Ultra-level dose of the psychedelic. Blimey! Pretty good for a girl – which as it turns out is the name of the first track proper (following the tongue-in-cheek cut n paste intro) an exercise in funky drum breaks, horn stabs and slow-burning organ chords. It’s the following six cuts which take things to the next level though.

The first three of these are farty-bassed paean to percussion Drum Battle, electro sci-fi synth-trip Top Intergalactic DJ and the LP’s biggest dancefloor cut Stereotyped Funk which opens with a sample from 80s Cali punks Descendents, of all things. Then it’s the turn of Digital Vs Vinyl Singalong to pit organic drums against heavy 808 bass before Dark Adaptation takes us into a paranoid mescaline-fuelled head-nodder and Phase 2 supplies a positively throbbing synth-bass powered number which could be an Automator outtake from Dr Octagonecologyst. Indeed if you like that frequency-bending, swirling synth bass sound from Blue Flowers you’re going to be happy as a pig in shit because it’s a sonic motif that occurs periodically throughout. Also periodic are a number of skits (in which Pnutz rips into mysogynists, music snobs, vinyl nerds and fake rappers using a mix of samples and custom-made vocal snippets) which further cement the LP’s hip-hop credentials and lighten the mood. Pretty good for a girl? Pretty good for anyone really – especially if you thought this scene was long played-out.
(Out now on Bulabeats)