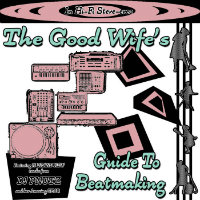 It’s been a minute since the B-Girl Breaks EP on Danny Massure’s Spring Strut label (well over a year, in fact) but here’s DJ Pnutz with her third full-length LP – The Good Wife’s Guide To Beatmaking. Yes, you heard that right – ‘her.’ DJ Pnutz is a woman, not a complimentary snack you sometimes get on your rider and she makes beats that sound – well – very much like those made by men. And now the gender thing is out of the way, onto the music which – er – focuses on the gender thing by opening with Handsome Boy Modelling School-style fifties dialogue samples that allow us to chuckle at what solid gold dicks some men in the fifties were now that we live in the enlightened age of Trump.

Apart from its title and the instro however, The Good Wife’s Guide To Beatmaking is not a gender polemic delivered via the medium of instrumental hip-hop breaks. Indeed, play virtually any track on here and there’s nothing to indicate they were made by one gender as opposed to the other. It’s just a varied range of quality hip-hop instros including the trip-hoppy and cinematic (Breadfruit Plantings, The People’s Dub), the latin-tinged (Cantame), the broken beats of Sun Shower, the Rage Against The Machine vibe of Funky Feeties (Look At Them Go) and the straight b-boy – oops my bad – b-girl fire of Boogie Down Daygo. Pnutz nods to her forebears in the crackly samples and dusty organic breaks of Hatbox Ghost recall Endtroducing-era (or earlier) DJ Shadow as, even more so, does the epic boom of Thank You Mr Sledge, while the low-in-the-mix electric guitar solo and vocal sample ‘switch-off’ motifs of But Its Just nod to DOOM. And that still leaves time to rip into hipster seven inch collectors on an interlude. Perhaps the final word on this LP should come from the dialogue sample at the start of May Me May We however:
“You’re different from other girls”
“That’s what you think.”
“You’re smarter…you’re almost like a man.”
“Oh no – I’m, very much the woman.”
“I don’t think of you that way at all…”
(Out now HERE re-released 2 Feb. on Bulabeats Records)