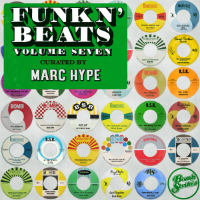 At the eleventh hour, (or more accurately, in the twelfth month) Bombstrikes make sure there’s still time to start the commotion before 2019 is out with the release of Funk N Beats Vol. 7.  You could be forgiven if you had become anxious that the year might pass with no new instalment at all, especially given that last year saw no fewer than three volumes of the now six year old Funk N Beats compilation series released.  But fear not for the label and none other than this volume’s curator, Marc Hype have you well and truly covered.  If you’ve checked previous volumes presided over by Pimpsoul, Beatvandals, Featurecast, Fort Knox Five, The Allergies and Smoove, you’ll know you’re in for a treat. The recipe remains the same – around twenty unmixed tracks (in this case twenty-one) drawn from the broader funky breaks axis with the intent to start your party.

One of the album’s USP’s is the fact that a couple of the tracks have never seen a digital release before – these include Voodoocuts’ excellent Etta James booty The Fool from a couple of years ago and The Traffic’s epic live funk cover of Daft Punk’s Harder, Better, Faster, Stronger, from this year – both of which originally dropped on wax 45.   There’s also more than a little Latin flavour at times in Mr Hype’s selections which in this comps’ case means Quantic & His Combo Barbaro’s Mas Pan (DJ Day mix), Sola Rosa’s Get It Together, Captain Planet’s Speaking Nu-Yorican and best of all two Red Astaire cuts – his NYC (Salsa Mix) and The Wildstyle.   Amongst the other bomb tracks assembled keep a keen ear out for Soopasoul oldie Do Me Wrong feat. Sitzka, party breaks bass bomb Swagger from X-Ray Ted, The Allergies’ splendiferous funk heater Can’t Keep Working This Hard, the super-hevay funk of Eric Boss’s Closer To The Spirit and a funky breaks re-flip of Hashim’s electro classic Al Naayfish (The Soul) by Hype himself and partner in crime Jim Dunloop.
(Out 6 December on Bombstrikes)

Posted on 6th December 2019 no comments