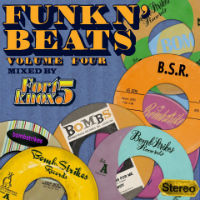 Got bombs to drop? You’ll need a crew with the skills. Which is probably why Bomb Strikes’ annual Funk N Beats series sees DC’s Fort Knox Five take control for Vol. 4. And take control they do with the regulation twenty-plus deep selection of ordnance to lay waste to global dancefloors. This selection is resolutely funky (you’d expect nothing else after all) and delivers both the old and the new. Ugly Duckling’s Taste The Secret LP hip-hop bump Mr Tough Guy and the jazz-funky breaks of Malente’s Funk The Rich and Black Machine’s How Gee are three nuggets representing the former while The Fundamentals’ monster Isleys’ edit Thing and Badboe’s twenty-first century soul breaks Get Your Boogie On represent the latter. There are rarities too – this is apparently the first time another oldie – Rhythm Mode:D’s Flex With The Posse ’89 hip-house cut – has seen a digital release and Lack Of Afro’s Touch My Soul mod-breaks collab. with Steve Marriott of the Small Faces fame also makes an appearance. Oh – and of course expect to find a couple of FK5 productions – one of which is their excellent slice of funk breaks with DC funk legend Sir Joe Quarterman – Don’t Go. Also keep your ears peeled for Kormac’s excellent but more chilled swing-breaks number Harry’s Record Machine and The Funk Fury’s b-boy/ spaghetti western banger from last year That’s The Funk Well, quite.
(Out 9 March on Bombstrikes)

Posted on 26th February 2018 no comments