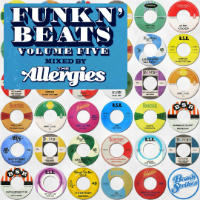 Good grief is it that time already? Yes it is! Bomb Strikes’ annual Funk N Beats compilation which ensures a healthy supply of – well – funk and beats to keep you going until the next offering is now in its fifth year with the unsurprisingly-named Vol 5 just out. But who to run the show in 2018? Who could possibly have the requisite curatorial skills? Enter a pair of youthful ‘Whispering’ Bob Harrises with a predilection for party boom-bap, party breakbeats and – er – party funk – the duo responsible for Craig Charles’ 2017 album of the year no less. Yes, it’s The Allergies of course – Bristol’s Moneyshot and Rackabeat, in full effect.

Regulars will be familiar with the drill by now, something old, a lot that’s current and a little bit that’s new too. Among the cuts falling under the first category of this tried and tested triumvirate of criterial selection is Bo Saris’ doing his best Marvin Gaye impersonation on the super sexy She’s On Fire, that ol’ Killer Meter’s favourite, Dance, Shake, Move and Tim Love Lee’s ancient late 90s bongo-tastic big beat effort, Again Son. The best of the current (or at least relatively recent) include The Allergies’ very own Blast Off remix featuring Andy Cooper (the closest thing to a new Ugly Duckling track you’ll hear this side of an actual new UD track), Voodoocuts’ Nico Gomez booty, Loopita, from last year, Format & Abdominal’s aging b-boy anthem We’re Back, and Djar One and Andy Cooper’s windmilling Get Down. And there are also some real treats in store in terms of the new or relatively unheard – Why You Buggin’ for instance – and The Allergies and Andy Cooper (yes, him again) re-imagining ancient Monkees-sampling Run DMC banger, Mary Mary. There is also – and how the hell this one passed the monkey by is still a mystery because wind of the original certainly made it to MB Towers – the excellent Featurecast remix of The Funk Hunters’ Chali 2Na-featuring Oh Shit. Faced with the Hunters’ newfangled sounds, Mr Cast opts to remix against type and finds a suitably old school Hammond-laced dancefloor groove with which to underpin the J5 MC. Bombs have struck!