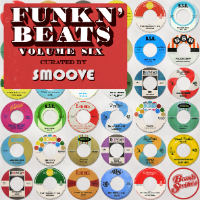 Once upon a time not even an annual affair, the popularity of the Bombstrikes label’s Funk N’ Beats compilation series has seen it become a thrice-yearly event in 2018. Now, following Fort Knox 5’s Vol. 4 and The Allergies’ Vol. 5, comes Vol. 6 to wrap (or possibly rap) up the year, compiled by none other than the man they call Berry Geordie – Newcastle’s favourite bongo-playing, producer son, Smoove. If you know anything about Smoove, you’ll know his musical tastes run from old school hip-hop, through party breaks to the neo-northern soul and disco beats of his massive live band project with John Turrell – Smoove & Turrell. Which means you’ll have some idea of what to expect when this beast is unleashed on your ears.

Thing kick off with the The Showtime Intro which is all the big horns fanfare old school introduction you could need followed by Breakdown Brass’s Rick James cover Mary Jane, a short edit of Smoove’s ‘lesson’ style tribute to Main Source samples, Main Sourced and Aim and Mikey Don’s heavyweight new project MAIDM with the b-side to last year’s massive Tun Up Di Heat, B-Boy Shit. The transition from hip-hop and funk to breaks is a managed by a neatly-positioned A Skillz & Beatvandals mashup – the O’Jay’s-sampling Money Banger and Smoove’s own remix of Torpedo Boyz’ Japaneeze Boys. It’s a party breaks – er – party which continues with Sleeve’s Get It On and ends with Smoove’s own Eddie Bird edit Big Bird. After which our man gets all nu-disco on your ass for a quartet of cuts from Kraak & Smaak, Groove Armada, Solar Shield and Crazy P with a Smoove & Turrell remix. Following what amounts to a mini-funk and hip-hop set, a mini party-breaks set and a mini-nu disco set, the final third of this collection finds Smoove mixing up all the aforementioned genres with abandon. This means you can expect to find more of his own edits brushing up against the likes Boca 45, DJ Format & Abdominal and Cookin’ On Three Burners because – well – because it’s all about the funk n beats, isn’t it?
(Out now on Bombstrikes)

Posted on 15th December 2018 no comments