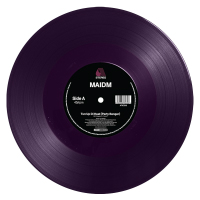 Stand by for the dopest Brit-hop dancefloor cut you’ve heard since Roots Manuva’s Witness. Cue splutterings, guffaws and stroking of exaggeratedly huge chins all round at such a grandiose claim, of course. But the thing is, producer and emcee on Tun Up Di Heat (Party Banger) are UK legends Aim and Mikey D.O.N respectively, known collectively here as MAIDM. And if the opening combo of Mr D.O.N. representing over Aim’s minimal but super-heavy afro-funk drums is more than enough to gain your curiosity, classic status is assured a mere half a minute in when the rudest of synth riffs demands your full attention for the duration. Not smirking now are we? As if that’s not enough, over on the flip (for this will be out on 10″ vinyl) it’s all about the rolling drum breaks and verbal score-settling as Mikey D calls it out for all the b-boys on B-Boy Shit. Even that’s not the end of the good news, for the pair are currently in the studio recording a full album. The case rests m’lud.
(Out 20 October on ATIC Records)