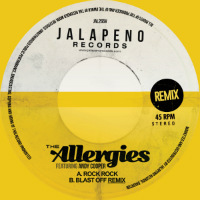 Whoo-eee! You won’t know whether to Rock Rock or Blast Off with this new double-Andy Cooper-featuring Allergies donut on Jalapeno. Haaaang on a minute. Didn’t Jalapeno release Rock Rock and Blast Off on 7″ already? Like two years ago? Ahhh – you’ll be thinking of the original vinyl drop when a 45 featuring speed-rap Rock Rock and the album version of Blast Off came out just before the release of the boys’ debut album As We Do Our Thing. Of course, that’s not so easy to get hold of now but who cares because now you’ve got a second chance to get your hands on Rock Rock and what’s far more important, the Blast Off remix. The drums bang harder, the horns are bigger and the vibe is way more upbeat – this is a bouncing peak-time bomb that recalls the very best Ugly Duckling bangers. Time to cold rock the party!
(Out 23 February on Jalapeno Records)