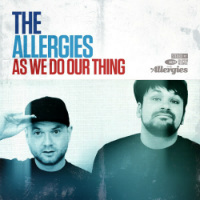 Finally – The Allergies (a.k.a DJ Moneyshot and his co-pilot Rackabeat) drop their full-length debut on Jalapeno Records. But hold on – a lot of cuts off this have already seen the light of day on a number of releases on different labels as far back as 2013. Can The Allergies’ ‘thing’ really sound all that box fresh or is it redolent of old musical socks and crusty tissues? As is the way of things when the Devil drives and the material warrants it, let’s have a track-by-track gander at things:

2. BLAST OFF feat. ANDY COOPER
Blast off indeed – golden-era beat, big horns and your boy AC on the mic. It’s like UD minus one emcee!

4. SOUND ADVICE feat. HYPEMAN SAGE
Taking the hip-hop party up a notch – more speed in bpms and probably chemically as well – say hello to Hypeman Sage on the mic.

7. FLIP THE SCRIPTURE feat. BLURUM13
Oh good, the vocal hip-hop is back. The distinctive Blurum13 holds the floor with a straight-up late nineties style banger.

8. BE WITH YOU
The boys make sure they cover the female demographic with this hypnotic disco groover.

10. ROCK ROCK feat. ANDY COOPER
The one this LP might well end up being remembered for. Andy Cooper again giving a lesson in breath control par excellence as he doubles up the rapping over an exhausting 145 bpm funk beat. Big horns too? You better believe it!

11. SPECIAL PEOPLE
Yet another energetic party funk bump with a 70s vibe this time – you can’t trump this…

12. YOU WOULDN’T KNOW
…oh – yes you can – this sixties soul-channelling party breaks bump.

13. LOVE’S SUPPOSED TO BE
The boys nod to the northern soul revival with another stomper.

15. GOD WALKED DOWN
Shall we end on a high? Yes why not let’s end on a high! How about a big-ass gospel-tinged breakbeat banger? That’ll do nicely!

COMMENTS:
Ok – you might have heard a lot of this before but even so – getting all those tracks in one place and adding in two new bangers and a couple of interludes is a revelation. It provides a reminder of the quality of The Allergies’ material, an overview of their sonic vision and is thus an album greater than the sum of its parts. These two come on like a retro-soul-obsessed Wiseguys, and the LP (especially for the initiated) is a veritable fifteen-track treasure box of funk, soul, hip-hop and party breaks that has everything you could ask of such material functioning equally well as a rich source of party bangers as well as something to listen to at home or in the car. No mean feat. Frankly, this looks like the second installment in Jalapeno Records masterplan to take over the world of contemporary funk, soul and party breaks in 2016 following the label’s release of the mighty Featurecast’s second LP and prior to the release of the mighty Smoove & Turrell’s fourth.
(Out now on Jalapeno Records)

BEST TRACKS:
As We Do Our Thing – Heartbreaker – Rock Rock feat. Andy Cooper – Special People – You Wouldn’t Know – Love’s Supposed To Be – God Walked Down