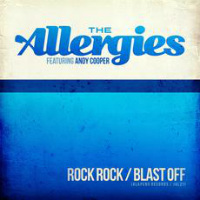 Andy Cooper finds more ways to gainfully occupy his time while there’s no Ugly Duckling stuff going on – this time with The Allergies on another piece of seven inch wax no less. The UD rapper has already made a couple of stabs at ridiculously fast raps – Ugly Duckling’s Sprint for example and his own solo Bring It To Me but here he trounces both previous efforts with the 145-ish bpm Rock Rock. If you find that all too exhausting however, you may prefer Blast Off which provides a reassuringly UD-ish backdrop for more conventional mic manipulation. Check also the super-slick video for Rock Rock and marvel as Andy risks life and limb in southern California while the canny Allergies merely lurk in the background doing little more dangerous than wearing a t-shirt apiece sporting the word ‘Rock.’
(Out 1 April on Jalapeno Records)

One Response to THE ALLERGIES feat. ANDY COOPER: Rock Rock/ Blast Off (2016) + video