THE CRABS CORPORATION: The Many Faces Of The Crabs Corporation EP (2013) 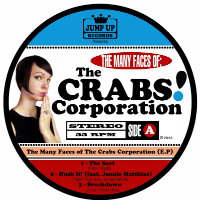 The many faces of The Crabs Corporation indeed! The Sort displays ‘funky reggae’ face, Breakdown adopts ‘James Taylor’ face and, most pervasively, Do It, Hush It and The Hard Mod Beat (the latter two featuring former Belle Star legend Jennie Matthias and UK ska stalwart Andy Keys respectively) give good ‘second wave of UK ska’ face. Indeed, the Jennie Matthias track is not only the sparkliest jewel in the crown on this gem-encrusted drop but a bona fide modern ska classic. Rock it in your car, nod to it on your headphones, groove to it on the dancefloor – this is the best release yet from the Buenos Aires-based Crabs Corporation – a perfect example of Anglo-Argentinian co-operation and thus one in the eye for nationalist flag-waving warmongers everywhere.
(Out now on Jump Up Records)

Posted on 28th September 2013 no comments