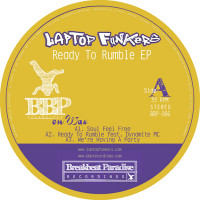 “Do you cue beats on a sampler or a laptop?/ Do you make the head nod or the ass drop?” asked underground rap legend Dooley O once. We all know there can sometimes be a certain amount of elitism attached to making beats but clearly that cuts no ice with Laptop Funkers who like to rock out with their cocks out. Or rather funk out with their laptops out. There’s so little snobbery here in fact, that they’ve even named this release after the nineties chart hit by populist UK comedy rap duo PJ & Duncan. Who would have thought Ant and Dec had such a following in Portugal? On the EP they deliver no fewer than six wax tracks, rebooting (among other things) S.O.U.L.’s Burning Spear and Dynamite MC and heading from jump-up funky breaks to big-horns disco-soul. File alongside stuff like Goodgroove and Manmade used to drop a while back or like Tru:Funk do now. Solid debut.
(Out now on Breakbeat Paradise)

Posted on 28th September 2013 no comments