THE ALLERGIES: Can’t Keep Working This Hard/ Run It Back (Vinyl 7″) 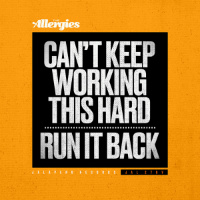 And just when you thought the summer dog days of music were kicking in early, The Allergies release their brand new Can’t Keep Working This Hard/ Run It Back vinyl 7″. With sister-funk on the A-side and party-starting hip-hop on the flip they’ve got all the types of music you’ll ever need in one handy 45 package. Making a return to vocal duties following last year’s excellent neo-northern soul cut Entitled To That, Honey LaRochelle turns in classic sister soul sauce over a stanky, chanking funk groove laying down the law to lazy menfolk everywhere while regular Allergies ally, Andy Cooper, plays the innocent in the background. Speaking of Cooper, guess who pops up on flip Run It Back, for a jazzy, fast-rap boom-bap attack? Turns out the boys have a third LP, Steal The Show, on the way already and this is the first single. They can’t keep working this hard, surely?
(Out 27 June on Jalapeno Records)