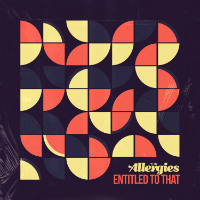 Entitled To That eh? And precisely what could The Allergies be entitled to as a consequence of their massive new single co-penned with Ugly Duckling emcee Andy Cooper in a neo-northern soul stylee? And by ‘massive new single’, I mean a banging horns-led stomp, weighing in with a classic 146 bpm tempo and featuring the supremely capable Honey Larochelle belting out that massive hook. Well, entitlement-wise, they ain’t lookin’ for flattery but how about Radio 2 as well as Radio 6 airplay? They ain’t running no games either but maybe full dancefloors everywhere this gets played? In fact all they want is reality really – so perhaps it’s best to make it plain – maybe they even deserve acclaim from notoriously hard-to-please northern soulies. Yes – they could be entitled to that. A drop, a spin and a kung-fu kick of a neo-northern soul heater!
(Out now on Jalapeno Records)