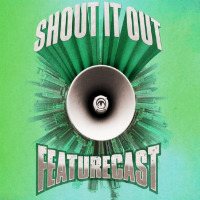 In 2012, Featurecast was pretty much the only person to have released anything like a full-length album which embraced the broad church of sound that has come to be known as ‘ghetto funk’ with his excellent LP Run For Cover. Four years on and – er – you can still count the number of artists who have released a full length ‘ghetto funk’ album on one hand, despite the genre’s obvious popularity. This being the case, and given the calibre of Featurecast’s work, you’d think there’d be a bit of a fanfare music press-wise with the arrival of LP number two, Shout It Out – you know – people shouting about it and so on and so forth. Google it however and things are a little less shouty in terms of a write-up than they should be. Then again, perhaps the music speaks for itself. Let’s kill two birds with one stone by finding out!

2. SHOUT IT OUT (AGAIN & AGAIN) feat. ILLVIS FRESHLY
The absolute bomb! A monster retro-tastic, Rick Rubin-esque, rap-rock, scratch-frenzy featuring a Faith No More sample on the bridge. Warrants a primal scream all on its own!

3. CRAZY
…as in not crazy. Laid back melodies, pensive vocal loops and layers of synth fuzz provide an emotive counterfoil to the title track’s fire.

4. 999
That’s better – Hendrix sample on the intro followed by pumping ragga-fuelled breaks and pitch-bent synth bass all over the place and up in your face. Call the cops!

5. CRYSTAL DAWN
40 seconds of gentle synth washes and a bit of emoting – before pneumatic dnb drums kick in. Almost as if a metaphor for the cinematic roles of the 80s adult movie star with which it coincidentally shares a name.

6. NO ONE LEFT feat. GREG BLACKMAN
Former collaborator and blue-eyed soul boy Blackman is back, man, for more of his ghetto neo-soul. Ladies beware!

8. GET ON THROUGH feat D’FRO & GREG BLACKMAN
Ladies watch out again – Greg’s back for a smoothie hook in between D’Fro’s smoothie bars.

9. HEAD NOISE
As in ‘ghetto’ acid jazz noise. Courtney Pine in the house! No, not really, Ted.

11. ADDICTED feat. D’FRO
More energetically employs the big band sample used by Abdominal on Walk Left Stand Right as D’Fro lays it down to that girl who can’t commit but can’t leave him alone either.

12. ANTICIPATE NOTHING
…except a suitable emotive ending. Perhaps some more synth washes..a downtempo beat…minor key melodies and then let it go all pensive dnb yeah? That ought to do it…

COMMENTS:
There are a striking number of parallels with its predecessor as it happens – both twelve tracks deep, both feature mid-tempo breaks plus the odd dnb cut and soulfully-inflected number and both feature guest appearances from Greg Blackman, Pugz Atomz and Ill Legit – but then such is often the way of album number two before the ‘difficult third’ LP – though there are clues on here as to where things may go next. Then again, if it ain’t broke, why fix it – there’s more than enough to make one raise one’s voice here and this is worth the price of admission for the title track alone.
(Out now on Jalapeno Records)