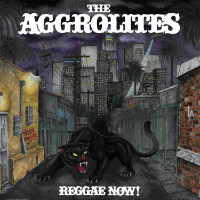 As the lyrics on recent single Pound For Pound have it, “It’s gonna be strong when you wait that long for the Aggro sound!”. And indeed there has been something of a wait since the last Aggrolites long player, Rugged Road – eight years to be precise, the consequence pretty much of creative burnout from a road which ultimately turned out to be a little bit too rugged. The good news is that while fans might have been waiting a long time for Reggae Now!, that ‘ol Aggro sound (the band’s self-styled ‘dirty reggae’ – a pastiche of late sixties/ early seventies boss reggae often characterised as equal parts Kingston and Motown) appears to be in extremely rude health. The LP not only yields classic tunes to rank alongside the best of the band’s previous material but also a set which addresses head-on issues which some (including the band themselves) have previously raised. Those include having gone ‘outside the box’ a bit (according to singer Jesse Wagner) on Rugged Road‘s predecessor IV, while Rugged Road itself raised eyebrows for the fact that it featured only four vocal cuts. This was particularly surprising because Wagner’s voice (one of the band’s twin secret weapons along with organist Roger Rivas’ vintage reggae licks) is straight up soul-man and (if the truth be told) more Stax than Motown. Not only did the band set out consciously to return to their dirty reggae roots on Reggae Now! however, but the instrumentals number only four out of fifteen tracks – a set length which means it also weighs in as somewhat trimmer than, say, the sprawling twenty-one track IV.

Incidentally, that eight year interval between LPs wasn’t actually a complete creative hiatus at all. Alongside sporadic gigs and top quality side projects (Reggae Workers Of The World for example), the band found time to record three new cuts in 2015 – Jackie Mittoo-ish organ-led instro Western Taipan, the mellow Help Man and the skinhead reggae romp of Aggro Reggae Party. All of these have been re-recorded for this LP and while all dope, the good news is that the unheard material on the album includes even stronger material. Among these is another big skinhead-style reggae nugget (the aforementioned Pound For Pound), the Delano Stewart-ish groove Hurry Up and the monkey’s favourite, Why You Rat, which employs the catchiest of boss reggae singalong hooks. Rivas’ vintage organ-playing is omnipresent of course channeling the likes of Mittoo et al throughout and displaying a prowess with vintage keyboards that recalls kindred spirit The Bongolian. It was never hard to see why Jamaican legends like Phyllis Dillon and Derrick Morgan chose to work with The Aggrolites – the Wagner/ Rivas combo has been a winner from the start. For any doubters, Reggae Now! is a triumphant return to form and well worth the wait, for the faithful there was never any loss of form in the first place and this is every bit a banger as previous drops.
(Out 24 May on Pirates Press Records)

One Response to THE AGGROLITES: Reggae Now!