THE AGGROLITES: Pound For Pound 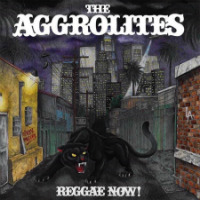 Let me see now, vintage sixties organ sounds, boss reggae vibes and a soulful growl? Pound for pound, there can surely only be one outfit that produces such glorious ‘dirty reggae’ sound and it is of course the one and only Aggrolites with new single – er – Pound For Pound. Turns out this is the harbinger of their sixth studio album, Reggae Now!, due towards the end of May and not a moment too soon since last LP, Rugged Road came out eight years ago! Those already in the know will be pleased to hear that organ player Roger Rivas has lost none of his chops and that the voice of singer Jesse Wagner (last heard of round here on last year’s MB LP of the year RWW II) is in fine fettle. Despite originally forming as a live backing band for Derrick Morgan, and having also backed rocksteady queen Phyllis Dillon and ska legend Prince Buster, not to mention producing resolutely soulful funky reggae for the entire duration of their seventeen year career, it has always seemed to be much more the global punk (as opposed to reggae, mod or soul) scene which has taken The Aggrolites to their hearts although this single, like all their output – ought to make it quite obvious that everyone except the punks has massively missed a trick. You won’t get fooled again though, right?
(Out now on Pirates Press Records)