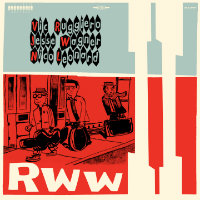 Despite the name, you won’t find Reggae Workers Of The World plying off-beat rhythms with a Marxist lyrical bent on RWW II, as anyone who caught RWW I will know. What you will get on new LP is the premium quality early ‘boss’ reggae and sixties/ seventies soul vibe of the first LP as part of an expanded stylistic palette which now includes doo-wop, sixties rnb and soul along with classic lyrics no more terrifying to your average tax-avoiding capitalist pig-dog than those of your typical early reggae or seventies soul band. But who has the facility to pay the utilities when it comes to such a project? Step forward Vic Ruggiero of NYC ska/ rocksteady outfit The Slackers, Jesse Wagner of L.A. ‘dirty reggae’ legends The Aggrolites and Nico Leonard from funky reggae bandits The Caroloregians. Why – it’s a veritable supergroup!

The album’s retro-classic status is immediately assured with the the blissful, closely-harmonised optimism of rocksteady opener of Pot Of Gold which will make you feel that all is right with the world even if you know it isn’t. This is followed by Wonder which takes things into more uptempo Two-Tone ska territory whilst maintaining the harmonizing that is a defining characteristic of the band. When you reach third track, Jesse James, however, suddenly the drums are on the beat and things are all about the mellow blue-eyed soul on this lilting ode to (presumably) the coward Robert Ford. After this there’s a brief return to the early reggae sound (albeit with shades of San Diego’s Slightly Stoopid) in Bump In The Night which establishes the LP’s agreeable pattern of dipping into other genres between those which draw inspiration from Jamaica of the late sixties and early seventies. Of particular note among the former are Never Go Home, based around a latin easy-listening rhythm, the superbly convincing doo-wop of Eye Of The Storm, the seventies Stones-ish honky-tonk rock of Every Once In A While, and another splendid blue-eyed soul cut – Never Get To Say Yer Sorry. Among the latter – a particular standout is the vintage organ-powered bluebeat skank of Danielle. If you’re doing the maths on the ratio of early reggae cuts to those influenced by music of similar vintage that is not reggae, you may already have divined that things are weighted towards the non-reggae, but it’s hard to imagine even hardcore devotees of The Slackers, The Aggrolites or The Caroloregians having a problem with RWW II. If there is any misstep it’s the closer – an early reggae cover of Rina Ketty’s J’Attendrai, in French – possibly not the forte of either the NY-based Ruggiero or the LA-based Wagner but you’ll be so busy having everything else on repeat that’s no real problem at all. Limited audio to embed currently but you can preview every track HERE.
(Out 22 June on Badasonic Records)