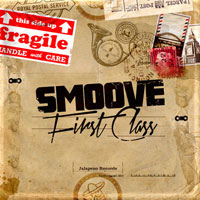 Need a funk/ soul/ disco/ latin / swing remix? Who you gonna call? That’s right – Smoove. For those not in the know, the Newcastle-based Smoove is the beat-making, bongo-playing half of critically and popularly acclaimed nu-funky-soul duo Smoove & Turrell – latterly of extensive Radio 2 airplay and Hollywood film synch fame. He’s also boss of northern jazz label Wass (home of Renegades Of Jazz and Daytoner) and his long-running mash-up label project Wack which has featured the work of such breakbeat luminaries as The Breakbeat Junkie, DJP, Pulpfusion, Suonho, Krash Slaughta, Prosper, Kid Stretch, Flying Fish and some guy named SMOV as well as being a name dj in his own right and, as implied earlier, a go-to remixer for those in the know – like The New Mastersounds, Bahama Soul Club and some guy called Afrika Bambaataa for example. Something of an underground music mogul then – not for nothing is he known as Berry Geordie round here.

First Class is a retrospective collection of fifteen of Smoove’s many remixes – selected from a potential forty that could have ended up on the album – in order to replicate the pneumatic energy of one of our man’s live sets. Highlights include a beat heavy version of Brenda Boykin’s hip-swingin Hard Travellin Man, b-boy breakin takes on The Ju Ju Orchestra’s Kind Of Latin Rhythm and the Third Degree’s Kylie cover Can’t Get You Out Of My Head, a drums of death rerub of Nick Pride, The Pimptones & Jess Roberts Waitin’ So Long, a big version of Da Wiesel’s Boogaloo Stomp and my favourite, an organ-drenched rework of Bahama Soul Club’s Nassau Jam on a northern jazz tip. That lot ought to get your party gannin reet. Free DL of Smoove’s Kraak & Smaak remix Call Up To Heaven on the top player below!
(Out 1 October Jalapeno cd/ digital)

Posted on 6th September 2012 no comments