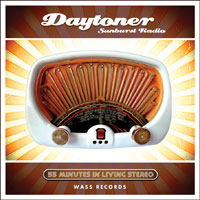 Penzance calling! This is what happens when you spend three years locked in a shed above the radioactive granite of Cornwall. The PR has it that Daytoner’s Sunburst Radio is a, “retro-ride through Latin American, Blues, Jazz, Swing and Motown rhythms, underpinned by dance floor break beats, linked by valve-age voices” and that’s pretty much spot on. Our man conjures a combination of late forties/ early fifties atmosphere for music that never existed back then lending his breakbeat rhythms a classy retro sheen. It’s like a Bakelite smartphone or fuck-off great gramophone trumpet speakers for your iPod dock or something.

Sunburst Radio is about right too since the overall vibration is one of summery ambience (presumably from a lost era too since there hasn’t been much of it in the last three years) periodically coalescing into anything from trippy-retro hop From The Root To The Fruit and the bluesy Arrested Development to club hits such as recent mod/ latin-influenced single On My Own, nineties-by-way-of-sixties-Motown Treat Me and All I Want or the swinging-Meters-sampling-latin-drum-n-bossa of Benz Bargain Bossa. It’s the perfect complement to the b-boy swing of Wass Records labelmate Renegades Of Jazz in other words and suggestive of the larger vision of label boss Smoove who I see now uprocking in Pumas. With spats.
(Out now on Wass Records)