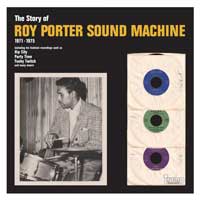 The Story Of Roy Porter Sound Machine is the latest in Tramp Records’ The Story Of… series and follows on from its superb predecessors featuring slept-on funky-soul man Vernon Garret and the unbelievably slept-on super-heavyweight Texas funk crew Soul Bros. Inc. While there’s been a funk-soul link between the previous two efforts, Roy Porter is a slightly different kettle of fish. He’s still funky but this is more of a jazzy affair. That’s right – it’s time to get your smooth on – but this is Tramp we’re talking about and if label boss Tobias Kirmayer puts it out, it’s worth a listen. Man knows his shit.

Porter himself was a drummer who had played with the bebop greats in the 40s, including Bird himself – Charlie Parker. What with all the heroin and an entirely different kind of bird though, he missed out most of the next decade and came up intermittently drumming (if not necessarily smiling) in the 60s. But that’s not the stuff this LP is about. Nope – here the focus is on the devil’s decade of the seventies – ’71-’75 to be precise. It says in the PR that he performed at dinner houses, nightclubs “and a lot of private parties for dancing.” The sly old dog.

Aside from chin-stroking jazzbos this is likely to be of particular interest to latterday hip-hop producers looking for an ATCQ/ Asheru & Blue Black kind of sound who should find many of the tracks on here fertile ground for samples. If that is your thing head for Ohh-La-La, Party Time and Panama, all of which feature some particularly stank opening bars. If you’re still hankering for something more phonky – keep your eyes peeled in September for Tramp’s Ancestors Of Rap comp. due in October.
(Out 10 September on Tramp Records)

Posted on 8th August 2012 no comments