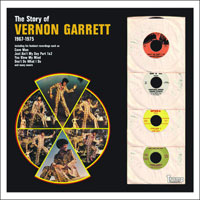 I’ve lost count of the times I’ve said that Tramp Records’ Tobias Kirmayer has done it again – but he has done it again. The Story Of Vernon Garrett is yet another quality retrospective look at the career of a funky soul legend who failed to get the recognition he deserved back in the day. And there’s no doubting that Garrett’s gospel-trained raw soul power is deserving of recognition as the sixteen tracks collected here demonstrate.

This man’s career actually spanned more than one decade and The Story Of… reflects this with a set that begins with the soulful rnb stomp of Caveman from the sixties and ends somewhere in the seventies with funk that displays disco flourishes like Going To My Baby’s Place and Love Junkie which sports both disco synths and rock guitar. Also on the LP are super rare dancefloor soul burner Don’t Do What I Do and seventies bass-popping funk bump Satisfying Woman, Satisfying Man (both soon to appear on a forthcoming 45 to promote the LP) plus there is, of course, plenty of funky soul. We get both a vocal and instrumental version of Just Ain’t My Day, two of the funkiest Christmas tracks ever (Christmas Groove and Merry Christmas Baby which also appeared on Tramp’s superb Santa’s Funk & Soul Christmas Party) and the lazier slink of I Learned My Lesson. Best of all though is You Blew My Mind a funky soul diamond resting on a spare but super heavy groove. Fatback drums, driving bass, scratchy guitar, occasional sax and our man’s raucous lyric about that chick who blew his mind last night. Further proof then (as if it were needed) that Vernon Garrett was not just a man who could get away with wearing a garish plaid jacket and matching flared strides way back when. Full audio previews on players below…
(Out 14 May on Tramp Records)