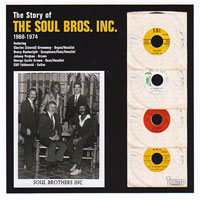 HIGHLIGHTS: African Slide/ Git It/ The Devil Made Me Do It/ Girl In The Hot Pants
SOUNDBITE: “God told me to take it easy –‘Are you gonna go before your time’? But if good-looking women in hot pants kill me, I don’t mind dyin’!”
Rating:

And just when you were thinking there couldn’t possibly be any more grade-A dusty old funky-soul cuts lying around from the late sixties/ early seventies that hadn’t already been re-released, re-packaged and generally given the widespread reverence they missed out on forty-odd years ago, German label Tramp Records drops this collection from Texan outfit The Soul Bros. Inc. It kind of reminds me of that Dyke & The Blazers package BGP put out a couple of years ago – which was also funk-soul gold from start to finish, although this, if the truth be told, is probably more accessible than Dyke. The story is an old one but familiar: a group of struggling young black musicians put out a couple of funk soul seven inches over a short few years around the tail end of the sixties and after brief, mostly localised, success they fade into obscurity in the early seventies. Forty years on, original band member Henry Boatwright has a phone conversation with Tramp Records and this blinding thirteen-track LP, every one a stone classic, The Story Of The Soul Bros. Inc. is the result. Big-sounding, early-seventies soul cuts like That Loving Feeling and Pyramid mingle with torch songs like Bimbo Knows but what really makes this are the high-octane super-heavy, funky soul scorchers and chicken-scratch funk bangers. Girl In The Hot Pants, The Devil Made Me Do It and African Slide epitomise the first while Git It and Soul Train Part 1 and 2 epitomise the second. Part of the charm with this collection also stems from the classic soul vocals and lines which are utterly of their time and include the unbeatable “God told me to take it easy –‘Are you gonna go before your time’? But if good-looking women in hot pants kill me, I don’t mind dyin’!” Be warned however – ‘of it’s time means’ means precisely that and I’m surprised that even in sixties’ Texas anyone could get away with the frankly alarming, “I grabbed her in the collar and I threw her across the bed/ I grabbed my little boy’s baseball bat and hit her upside the head.” Mind you, given that ‘Joe’ was going to, “Shoot his old lady down,” for infidelity in, “Hey Joe,” it’s not entirely without mainstream precedent.

Notorious diggers like Keb Darge and Ian Wright probably sacrificed several thousand pounds and a testicle each for original pressings of the seven inches actually released by The Soul Bros. Inc. years ago, so they might possibly be excused from procuring a copy of this but for anyone else with the slightest interest in soul or funk it’s hard to describe it as anything other than essential.

Posted on 28th November 2010 no comments