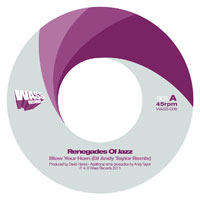 If you’re on top of your funky ass shit this year you ought to have caught Renegades Of Jazz’s superb Hip To The Jive LP – an album which has virtually single-handedly rescued the jazzier side of funk-related music from the smug clutch of self-indulgent whiteboy jazz funkers. Who better to remix than ROJ then and who better among remixers to hand stuff over to than Glasgow’s finest Latin breaks merchant Andy Taylor or trans-Atlantic hip-hop production duo Herma Puma. AT’s version of Blow Your Horn opens with an organic bit of Havana clatter followed by the drop-out/frequency-fuck-around re-intro and then steps it up a gear with some organ action. HP give Seaside Suicide’s break more hip-hop bounce, chop up the Rachmaninoff sample from the original and employ Toronto rapper Redkin Tha Ancient to get his best Pharcyde on and Krash Slaughta to pull out his cuts. Nice. As Louis Balfour might say. And there’s a whole LP Hip To The Remix to follow…
(Out now (on limited wax) on Wass Records)

(PRESS RELEASE)
Taken from the forthcoming Renegades Of Jazz – Hip To The Jive Remixed Album comes these two choice cuts back to back on a limited 7” vinyl. First up is Blow Your Horn Remix which has been given a full on Latin Breaks Boogaloo twist from Scottish Label mate DJ Andy Taylor. Herma Puma deliver an incredible Remix of Seaside Suicide featuring Redkin Tha Ancient’s super slick rap while Scottish jock Krash Slaughta steps in to lay down some deadly cuts!

Posted on 29th November 2011 no comments