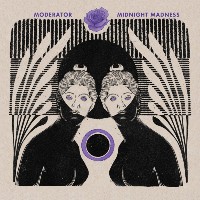 “Good midnight to you!” Thus begins the new Moderator LP, Midnight Madness, with a retro movie dialogue snippet heralding precisely the massive payload of dope that album preview tracks Wish I Was Dead and Unspoken suggested it would deliver. Not that there was ever much doubt given previous long-playing efforts, 2019’s The Mosaics and the previous year’s The World Within.

Of course, if you know those two LPs, you’ll already know the salient facts about our Mr M – firstly his relative youth in terms of a type of music last trendy around the turn of the millennium, secondly his eclectic taste in sounds and influences and thirdly his firm belief that using breakbeats and a dusty jazz sample doesn’t automatically require you to turn in a 70 bpm stoner groove.

And so to Midnight Madness, slightly longer than both his previous efforts, just as kaleidoscopic in terms of sound palette and just as likely to turn in instrumental boom-bap dance tracks as evocative slowies. The unifying inspiration for this one is the atmosphere of late-night movies from the fifties and sixties – horror, biker, beach, psychedelia, Spaghetti Western and more – you name it, Moderator’s all over it.  The LP nods to the soundtracks of all of these genres at different point and sometimes to more than one in any given track.  Opener The Story Begins pitches slo-mo surf guitar and original Twilight Zone-style narrative against the slowest of drum breaks and sets a relatively slow initial tempo continued on the Latin-tinged Unspoken and languid noir OST-isms of Walking Slow. Wish I Was Dead picks up the pace pitting fat mid tempo drums against Cab Calloway-ish jazz samples before Guilty As Charged drops a huge Wiseguys-style Latin-influenced breakbeat bounce. Look out also for big band jazz-influenced Haunted Lover and the cod-voodoo-exploitation groove of Tamboo.   Switch off your engine, hang that speaker from your window and get ready to bug out and quite possibly jitterbug out.
(Out now (digital)/ pre-order now (vinyl) on Melting Records)