MODERATOR: The World Within 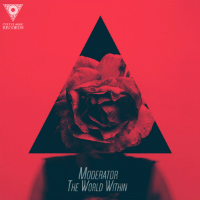 Yet more quality downtempo from the Melting Records stable – this time from twenty-two year old producer Moderator who’s so young he wasn’t even born when Bristol supplanted Seattle as the musical underground’s city of the moment and grunge guitars were ditched for atmospheric 80-90 bpm loops and breaks. Even more remarkably, World Within was originally released three years ago on Cult Classic Records when our man was little more than an embryo which means, yes, the current release is actually a re-release put out to commemorate Moderator’s signing to Melted. Well, they are a little bit excited about nabbing him – as well they might be since such a high quality example of the trip-hop genre as The World Within from one so young clearly suggests great things lie ahead.

Proceedings commence, appropriately, with an incantation on opener Bind You To My Spell which features both original soul vox from Jeanette Robertson and spaced-out bars from rapper Witness. The album is, of course replete with all your favourite trip-hop tropes. Words Remain turns on haunting strings and late-night smokey basement jazz vocals for example while closer Space Vandals delivers psychedelic soundtrack vibes and Harlem River, which contains a sample of folk singer Kevin Morby, kicks off with spaghetti western guitars. Well worth your time if you’re at all keen on beats to chill to.
(Out now on Melting Records)

Posted on 24th February 2018 no comments