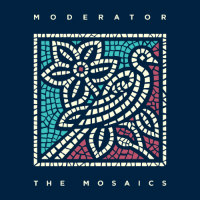 I suppose there are those who might be tempted to refer to new Moderator LP The Mosaics as a ‘world music’ album although to do so you’d have to square the soundshapes of its exotic samples with the more-or-less omnipresent slabs of boom-bap drums throughout. So that’ll make it an instrumental hip-hop album with exotic samples then? Much better and no, that doesn’t mean trip-hop – more than half the LP is dancefloor-speed material.

While Moderator’s breakbeats are firmly in the spirit of the Five Boroughs, his sound collages do undeniably draw from the musical heritage of the Middle East, the Balkans, Latin America and Africa. The vibe is indisputably hip-hop however, and if the conceit of pairing exotic sounds with funky drum breaks has been done before it’s rarely been done with this much energy. It’s a point made within eleven seconds of opener Ararat Valley as a high-pass-filtered horn sample swirls down into demonic laughter and a positively cavernous groove. The pace actually picks up for Montego Bay though the sinuous sax-led beat is less in your face before Balkan Eros drops the tempo right down to something that genuinely might have appeared among the glut of nineties trip-hop and simultaneously takes sinuosity to a new level.  As noted above though, characterised by sleepy grooves this LP is not and it isn’t long before we’re back up in the hectic percussive territory of the tabla-fied The Don and the faster grooves of Dance Of The Shaman.  Let’s also not forget Spice Lahore (which doesn’t just share a name with your local curry-house but also a similar ability to re-arrange your innards – though in this case through the medium of bass vibrations), the sexily-groovy Brazilian-themed Victor’s Bossa and the hypnotic Africa’s Calling.  Moderator’s The Mosaics then – it’s a trip!
(Out now on Melting Records)

One Response to MODERATOR: The Mosaics