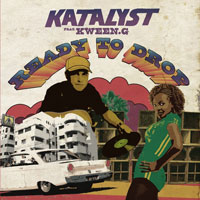 Oz-producer Katalyst follows up his sweet downtempo reggae Stephanie McKay-collabo Day Into Night with party-starting, breakbeat-fuelled, Kween G vehicle Ready To Drop. Channelling an old school NY hip-hop vibe without sounding overtly retro and adding a dash of the sort of territory explored recently by the Beastie Boys/ Santigold hook-up Don’t Play No Game That I Can’t Win, it also samples the Beasties’ habitual call-out “mmm drrrrrrop.” Admittedly, As we all know, ‘ready to drop’ is a phrase with a multitude of connotations but happily, here, the first thing that springs to mind is how you’ll be feeling after having a boogie to this. Ready To Drop is – er – ready to drop next month and Katalyst’s new album Deep Impressions just under a month after that – no doubt ensuring a very late Indian summer. At least musically.
(Out 19 September on BBE)

Katalyst is the Sydney based producer Ashley Anderson of international acclaim. All of his solo releases have been nominated for ARIA Awards in Australia and there’s a strong fan base established for his work worldwide. He also runs the Invada label in Australia with Portishead’s Geoff Barrow.