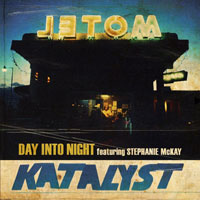 Between them Katalyst and Stephanie McKay seem to have captured the authentic atmosphere of a French summer’s evening with this sweet little number from Katalyst’s forthcoming album. Not bad for someone from Sydney and someone from New York and even weirder since it’s a slice of tremolo-guitar infused reggae soul that should probably have conjured up somewhere Jamaican or at least New World-y, especially given the (classy) cover artwork. Never mind, I’ve long given up trying to understand the vagaries of my own brain, so French summer evening it is and the one I’m thinking of is warm and beautiful and tinged with melancholy a bit like Day Into Night. Apparently our Steph’s bloke’s done a runner and she’s trying to kid herself he’s coming back even though she knows he isn’t really. Never mind love! Swing by and I’ll put the kettle on – you’ll be right as rain after a nice cup of tea.
(Out 18 April 2011)

(PRESS RELEASE) We are very excited to bring you the new single by internationally renowned, ARIA and J Award nominated producer Katalyst! The Sydney based producer is back with a brand new single ‘Day Into Night’ featuring Stephanie McKay.

Katalyst is the Sydney based producer Ashley Anderson of international acclaim. All of his solo releases have been nominated for ARIA Awards in Australia and there’s a strong fan base established for his work worldwide. He also runs the Invada label in Australia with Portishead’s Geoff Barrow.

Taken from his soon to be released fourth full length album, ‘Day Into Night’ features one of Katalyst’s favourite soul singers and long time collaborator Stephanie McKay (USA). ‘Day Into Night’ is a reggae soul number that’s sure to be a classic summer tune. Stephanie’s sweet vocal melodies flow effortlessly over the driving bass and guitars, which will no doubt make! you nod your head.

Katalyst has been busy in the studio for some time now crafting the follow up to his 2007 album ‘What’s Happening’, an album met with great acclaim (including a triple j feature album). ‘What’s Happening’ went on to be picked up for worldwide release on BBE. Katalyst followed up the release with new project Space Invadas, his collaboration with Steve Spacek. The duo has been nominated for a 2010 ARIA award and have gone on to be signed internationally. The Space Invadas album ‘Soul:Fi’ just saw its international release on BBE in February 2011. ‘Day Into Night’ gives us a taste of what’s to come on the new Katalyst album, the title of which he is keeping close to his chest.