JIMMY PLATES & ENDEVERS: With No Delay… 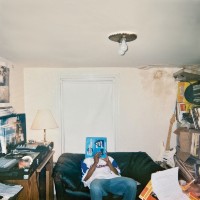 It is of course purely coincidental that an LP recorded in the noughties by Jimmy Plates & Endevers, given the ironic title With No Delay… and finally released towards the end of October this year is only now receiving coverage on MB a month after dropping. One likes to think that the London-based Plates and Philly collective Endevers will see the funny side. I blame Covid. Still, With No Delay… is indeed out and one more example of the hip-hop magic that so often seems to be the consequence of Stateside emcees joining forces with a UK producer.

It seems the eight-tracker was the (mini-)album follow-up to the only previously released Jimmy Plates and Endevers collab. prior to this release – that of 2003 vinyl 12″ Big Rigs b/w Tasty Kakes. And those who dug that effort will be more than pleased to get their ears around more fat boom-bap drums augmented by a fine selection of soul samples and the assured lyricism of Endevers’ six strong crew of Tungsten 9, M-Dub, Shizzy Mack, Reese Wills, Ike Philthy and Asa Zimbabwe. Among the cuts featured are first single and first track proper, Vinyl Comeback, which opens with a warm soul loop before settling into hip-hop of a vintage that will warm the cockles of any peeps who ever dug any of those Aim feat. Q-Ball & Curt Cazal collabs. Indeed the same goes for all tracks featured – among them, second single, Tree Gods. The monkey’s favourites though are the hard-hitting beats and battle rhymes of LP centrepiece Right Now and, better still, heavy funk juggernaut and closer Whatcha Say on which more battle rhymes are unleashed, “The name’s Tungsten 9 – tell an amigo/ Apologise ahead of time for crushing your ego.” Ah yes, hip-hop. You remember.
(Out now on Fabyl Recordings)

Posted on 25th November 2020 no comments